OTTAWA & MONTREAL, Canada – November 27, 2018 – BluWave-ai announces that it has raised more than $1M from several international angel investors and institutional investors, including the Ecofuel Fund, as part of a pre-seed round. This will enable BluWave-ai to implement its visionary strategy of optimizing energy efficiency in smartgrids using artificial intelligence. BluWave-ai has also been selected by the Ecofuel Accelerator as part of their Fall 2018 Cohort. Ecofuel enables some of the most promising Canadian start-ups with a path to large scale-out and significant GHG emission reductions to mature their business on all fronts from technical, IP protection, market, sales channels, and corporate management to excel in global markets.

“BluWave-ai’s disruptive technology and lead customer execution in the renewable energy market is something that has attracted numerous investors and we’re happy to collaborate with the management team to expand its renewable energy AI software nationally and globally”, said Richard Cloutier, President and CEO of the Ecofuel Accelerator and Managing Partner of the Ecofuel Fund.

“Over the last year, BluWave-ai has built strong customer traction having signed agreements with Canadian energy providers such as Hydro Ottawa, the City of Summerside, and TUGLIQ Energy Corporation. We have also secured an agreement with one of the largest utilities in the Indian market. In addition, the team has filed four USTPO patents and has advanced its full vertical stack energy AI products,” said Devashish Paul, CEO BluWave-ai, “Ecofuel powered by Cycle Capital are experts at scaling businesses in the global cleantech market. We are excited to leverage their experience to grow our company and surpass the one million pre-seed threshold.”

The participation of Ecofuel also includes Johanne Sevigny Managing Partner of the Ecofuel Fund joining the team on a board observer seat to assist company executives on the path to closing a target $2M seed round. This will propel the company towards a global scale-out with its promising patent filed technology post Series A.

BluWave-ai’s solution consists of components at the edge and cloud data center which can be licensed with a SaaS model. BluWave-ai Edge is installed at the aggregation points of IoT sensors, meters, and other sources of data. BluWave-ai Center runs in either the private data center or public cloud, securely collecting data from Edge nodes to train AI models and coordinate functions between multiple BluWave-ai Edge locations. It includes an ensemble of machine learning and statistical techniques that discover patterns in data, performing predictive analysis and pattern recognition in real-time. AI models include wind, solar, battery state-of-charge, load, and energy market pricing.

Ecofuel is a venture capital fund and a specialized and personalized accelerator dedicated to the cleantech startups. Ecofuel, powered by Cycle Capital, works with entrepreneurs to help build globally competitive companies. Ecofuel Fund invests smart money in seed stage startups that develop and commercializes clean technologies while the Ecofuel Accelerator offers entrepreneurs a specialized and personalized program of training workshops, networking sessions, an experienced mentor ecosystem. In addition to the funding provided by the Government of Quebec, the Ecofuel Accelerator benefits from the collaboration of Transition énergétique Québec, Écotech Québec and Innovacorp. 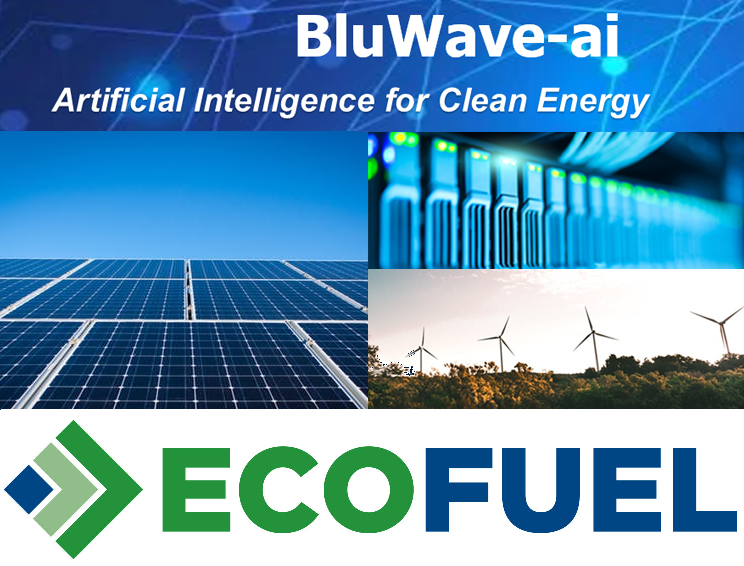